As well as to the hospice movement, the Ian Crabtree Charitable Trust makes grants to students of state secondary schools in Wellington and Porirua.

Which students are eligible for grants?

Students who meet the eligibility criteria can approach their school administrators to apply for a grant on their behalf. Schools may also take the initiative of applying for grants for students they know to be disadvantaged.

The eligibility requirements are;

Apply by email or letter.

Grant applications should be made to; 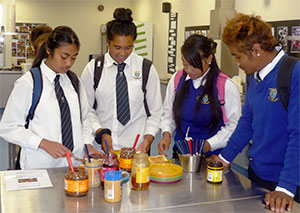 Students get a healthy start to their learning  day

The Trustees consider individual applications as they are received, and approved grants are paid directly to the relevant school for distribution to the students involved. We appreciate knowing about the benefits grants have made, and welcome feedback from the applicants or students.

Feel free to contact us if you need more information.

This Trust is the legal means by which Ian’s assets could be invested and administered. In a trust, no one can access the funds except for the people who operate it, called the trustees. Ian handpicked two people he knew and respected as his inaugural trustees, David Hurley and John Simpson, entrusting them to invest the funds of money and distribute the surpluses according to the philanthropic wishes he set out in his will.

From the outset, they set themselves the task of maintaining the real value of Ian’s trust fund, as well as making significant distributions in the form of grants to the groups he identified in his will. These groups were disadvantaged secondary school students and the hospice movement in Wellington and Porirua.

In 2013, John Simpson retired from the Trust and the power of appointment of new Trustees passed to the Rotary Club of Wellington North, of which Ian was a member for eleven years before he died. Two members of this club have now joined David Hurley as Trustees.

Please apply by email or letter on school letterhead setting out the reasons for your grant request, and detailing the student’s eligibility and the amount of financial assistance required.